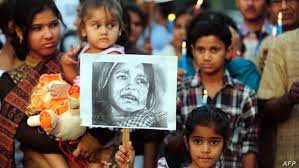 In 1992, the Ajmer rape case was one of India’s biggest cases of coerced sexual exploitation, with more than a hundred underage schoolgirls estimated to have been sexually molested and raped. Most accused were from the Ajmer Dargah of Moinuddin Chishti.

The gang rape of a 23-year-old student on a public bus, on 16 December 2012, sparked large protests across the capital Delhi. She was with a male friend who was severely beaten with an iron rod during the incident. This same rod was used to penetrate her so severely that the victim’s intestines had to be surgically removed, before her death thirteen days after the attack.

The following day, there was an uproar in the Indian parliament over the incident. MPs in both houses had set aside their regular business to discuss the case and demanded strict punishment for those who carried out the attack. The Leader of the Opposition in the Lok Sabha, Sushma Swaraj, demanded that “the rapists should be hanged”. Thousands of people, mostly young, participated in a massive demonstration on 22 December in protest. Police arrested six men suspected of rape.

In August 2013, a 22-year-old photojournalist, who was interning with an English-language magazine in Mumbai, was gang-raped by five persons, including a juvenile, when she had gone to the deserted Shakti Mills compound, near Mahalaxmi in South Mumbai, with a male colleague on an assignment. This caused protests throughout the country since Mumbai with its very active nightlife was previously considered a safe haven for women. The city sessions court found the accused guilty and sentenced death penalty to the three repeat offenders in the Shakti Mills gang rape case, making them the first in the country to get the death sentence stipulated under the newly enacted Section 376E of the Indian Penal Code.

On 14 March 2015, a 71-year-old nun was gang-raped in Ranaghat, West Bengal by intruders at the Convent of Jesus and Mary. The six intruders were recorded on CCTV during their crime of ransacking the chapel, destroying religious items, looting cash and the gang rape. Six men were arrested and charged with the crime by 1 April 2015, and identified to be Bangladeshi Muslims.

On 29 March 2016, the corpse of Delta Meghwal, a 17 year old Dalit girl, was found in her hostel’s water tank. Following the registration of the police case the hostel warden, physical education teacher and principal were arrested by Bikaner police and kept under judicial custody. The State eventually acceded to a CBI inquiry after the issue became politicised.

On 17 January 2018, Asifa, an 8-year old minor girl, was raped and murdered in Rasana village near Kathua in Jammu and Kashmir. The incident made national news when charges were filed against eight men in April 2018. The arrests of the accused led to protests from groups, one of which was attended by two ministers from the Bharatiya Janata Party, both of whom have now resigned. The rape and murder, as well as the support the accused received, sparked widespread outrage.

There have been allegations of rape and mass rape in Jammu and Kashmir. Reports have shown that rape has been carried out by both Indian armed forces and Islamist militant groups.

The rapes by Islamic militants have been reported since the Indo-Pakistani War of 1947. On 22 October 1947, Pashtun militants invaded Baramulla in a Pakistan army truck, and raped women including European nuns. In March 1990, Mrs. M. N. Paul, the wife of a BSF inspector was kidnapped, tortured and gang-raped for many days. Then her body with broken limbs was abandoned on a road.

The International Commission of Jurists have stated that though the attacks had not been proven beyond a doubt, there was credible evidence that it had happened.In 2011, the State Human Rights Commission (SHRC) asked for the reopening of the case.

Militant organisations such as Hizb-ul-Mujahideen, Jamiat-ul-Mujahideen and Harkat ul-Ansar have been accused of carrying out rapes. The Jammu Kashmir Liberation Front has been accused of ethnic cleansing of using murder, arson, and rape as a weapon of war to drive out hundreds of thousands of Hindu Kashmiri Pandits from the region. Following the rise of rapes by the Indian armed forces and militants, HRW has submitted that the victims of raper suffer ostracism and there is a “code of silence and fear” that prevents people from reporting such abuse. According to the HRW, the investigation of case of rape by Indian forces and militants is difficult because many Kashmiris are reluctant to discuss it for the fear of violent reprisals.

Human rights groups allege that the Indian armed forces under the protection of the Armed Forces (Special Powers) Act, 1958 have carried out a large amount of rapes in the Nagaland, Assam and Manipur provinces. Karlsson writes that there are reports that much of the violence against civilians, including sexual assault, is inflicted by the rebel groups and armed criminal gangs in the region.

There is wide discrepancy among reports of rape and sexual assault. For example, according to the People’s Union for Civil Liberties (PUCL), the majority of those assaulted in 2007 were poor women from remote areas and Dalits. SR Darapuri of the PUCL alleged, “I analysed the rape figures for 2007 and I found that 90% of victims were Dalits and 85% of Dalit rape victims were underage girls.” Darapuri allegations do not match with the data compiled by National Crime Records Bureau of India, which found 6.7% of rape and sexual assault victims were Dalits in 2007, where nearly 16% of Indian population is classified as Dalit.There were 391 cases of rape of Dalit victims reported in Uttar Pradesh in 2013 or about 1 per 100,000 Dalits in the state of about 200 million people (21% of which is classified as Dalit)